Woodland walks in Birmingham and the Black Country

"The concept of ancient woodland was a radical one in the 1970s. The popular wisdom was that woods were human artefacts, and could only begin their lives by being deliberately planted."
The Cabaret of Plants, Richard Mabey.

This is rather surprising and I'm most intrigued at RM's claim, not that I'm disputing it in any way, but I've imagined Britain in ancient times as a more or less wooded land for most parts, broken only by marshland and mountain top, and even here, I imagined Alder and Willow carr and dwarf or wind blown trees up to the tree line. And whilst this, to some extent, may still be debated, RM's point is that the 'concept of ancient woodland' as a means of distinguishing wooded areas in ecological terms hadn't been addressed until the 1970's.

Wikipedia suggests somewhat later -
"The concept of ancient woodland, rich in plant diversity and managed through traditional practices, was developed by the ecologist Oliver Rackham in his 1980 book Ancient Woodland, its History, Vegetation and Uses in England, which he wrote following his earlier research on Hayley Wood in Cambridgeshire" (Wiki) 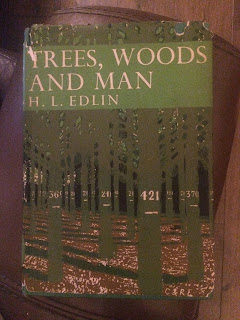 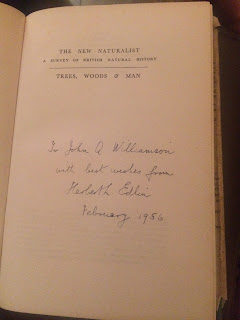 My first edition contains an inscription from Herbert Edlin (1956)