Birds of Highbury by Ron

Long tailed birds
Ringed neck parakeets have become a feature of Highbury Park over the past few years.

Nesting in holes, of which there are plenty in standing dead trunks.


Highbury Park is well known for its variety of bird life, attracted by its diverse habitats.

Over the past ten years or so the park has been addressed with the unmistakable squawks and chattering of parakeets. Hole nesting birds, successfully breeding in standing dead trees  and during Winter 2015 a flock of six birds were seen cavorting the park.

Winter flocks of Tits and Finches flit from tree to tree, picking at the lichens in search of morsals, such as mites, spiders and grubs

The park contains a rich mix of trees and tree cover providing opportunities for many species to feed, shelter and nest.


Hole nesters
Three woodpeckers have been recorded at Highbury, the Great Spotted, most often seen or heard, as well as the 'Yaffle' or Green Woodpecker.

Lesser Spotted are less frequently reported but often seen amongst the mixed flocks of small birds that gather and feed in Winter. 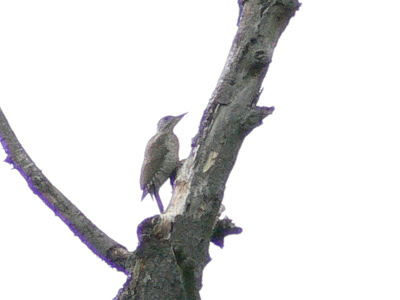