- January 07, 2016
Other evergreens alongside our collections and plantations of conifers include some interesting broadleaved species such as Ivy, Holly and Holm Oak.

Ivy in particular causes strong debate amongst tree managers as their considerations involve public health and safety alongside the welfare of individual trees. Richard Mabey tells us that "Attitudes towards ivy have been ambivalent since classical times" (Flora Britannica). Once believed to counteract the effects of alcohol, observed in the plant's ability to "smother grapevines" and thought to indicate some sort of cure for, or prevention of hangover. 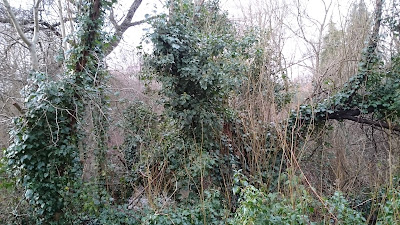 Ivy clad undergrowth, shown here on the Rea riverside, is a valuable plant throughout the year, providing food and shelter to birds and invertebrates, especially Holly Blue butterflies-
"The larvae feed predominantly on the flower buds, berries and terminal leaves of Holly (Ilex aquifolium) in the spring generation, and Ivy (Hedera helix) in the summer generation." (Butterfly Conservation -
http://butterfly-conservation.org/50-923/holly-blue.html ) 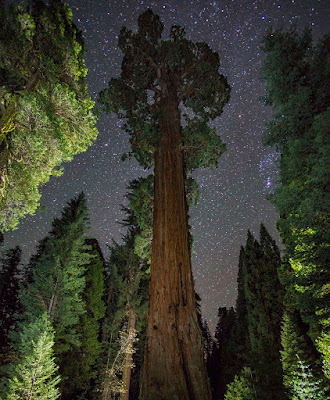 A gorgeous night scene of the largest tree in the world -- General Sherman Tree in California’s Sequoia National Park. Christian Loya captured this stunning shot last month. Of the experience, Christian says, “I had been trying various compositions for hours before everything came together. The skies finally cleared revealing a blanket of stars against these old and majestic trees.” Photo courtesy of Christian Loya. — at Sequoia and Kings Canyon National Parks