The wooded fabric of the Rea Valley was once again enhanced THANKS  to the support of 'Forest School Birmingham', 'Trees For Cities' and our WOODLAND WEDNESDAY VOLUNTEERS, on this occasion at Highbury Park, with the planting of 600 hedgerow trees/shrubs including HAWTHORN, HAZEL, APPLE, ROWAN, GUELDER ROSE, DOG ROSE, FIELD MAPLE, ELM and ALDER BUCKTHORN. 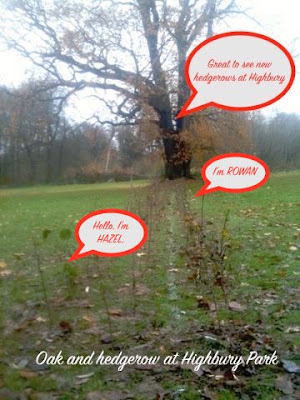 Check out alcoa.com to see more about the 10,000,000 trees project and http://forestschoolsbirmingham.com to whom we owe gratitude for establishing this project.

The Highbury planting followed consultation between the Rangers and the 'Working Party' to establish the lines on which the new hedges should follow.

The 1904 OS map of the park shows old hedge lines within the grounds of Highbury, although many had been 'grubbed' out during the Chamberlain landscaping era.

Four lines were proposed, two to the south of the long pool and two to the north. One of the factors was the 'Great Oak' to the north. This two, once three limbed specimen is under scrutiny from Tree Officers to ensure prolonged life for this important veteran. Popular opinion is against pollarding the tree, so other means of keeping the majority of people at bay was considered. Hence - hedgerow, scrub development and a dead hedging combo was decided.

The Great Oak (circa 1700) is highlighted on the map above with the hedgerow to the west. These were then chosen to 1. reinstate a former hedge and 2. protect the Great Oak. 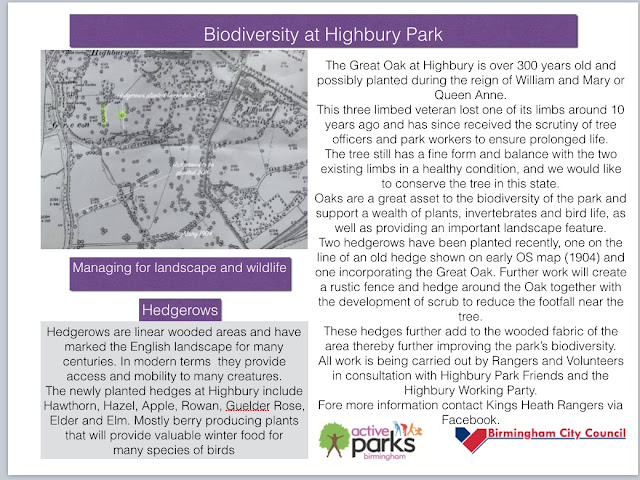