Mapping the Oaks I

- September 02, 2017
Birmingham is regarded as a surprisingly green city, so much so that it boasts the title as Britain's only Biophillic city.
This Guardian article explains why -
https://www.theguardian.com/cities/2014/apr/03/birmingham-san-francisco-oslo-global-green-biophilic-cities-club 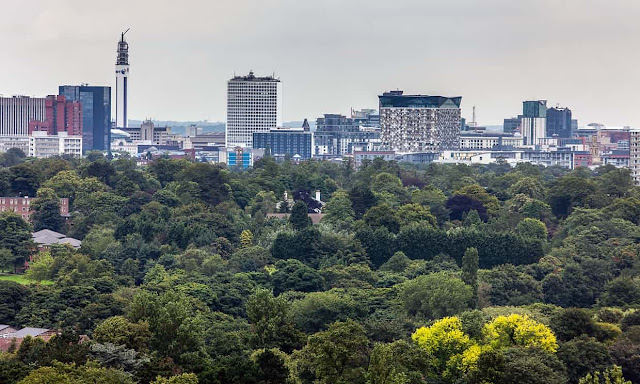 The City and its suburbs, especially to the south and west, seems to emerge from the canopy, or maybe, yet somewhat romantically, sinking into the inevitable reclaiming of nature. For sure the trees are often spoken of in terms of nuisance and liability, but also protected vigourously and energetically, with thousands planted every year by organisations such as Trees For Cities, Trees For Life, Forest Schools Birmingham and virtually all the Parks' Friends groups.

A city of trees


Many street trees were planted in the 19th and early 20th Century and as such are nearing the end of their unnatural lives. Limes, Planes and Poplars were planted along major routes in a bid to absorb the rising city pollutants. Many have become a liability, but the desire to preserve, protect and replace where necessary is as great as ever, yet a headache for the tree managers.

Arguably, the most important city trees are the oaks, many of which are well over 100 years old, but exactly how many and how widespread the oaks are in Birmingham is uncertain. I have an idea of the accessible trees around Kings Heath, certainly in the public spaces, but there are significant specimens in private grounds, and it's these hidden, inaccessible individuals that should be accounted for. It is well known that unscrupulous land developers display little care for an inconvenient tree standing in their way, regardless of species, age or beauty.

Some of the City's oak trees are much older than the city itself, Birmingham was declared a city in 1889, a mere 128 years ago.

The oldest local oak I know of to date is around 400 years old (C1617), near Cannon Hill Park, with a girth of 6 metres, Birmingham then was a market town, and wiki informs us that "Despite a series of plagues throughout the 17th century, by 1700 Birmingham's population - was the fifth largest in England and Wales". Yet what we now think of as 'greater' Birmingham was largely rural, in the throes of 'Parlimentary Enclosures' and a subsequent aftermath of ruthless land grabbing and deprivation which would continue until the 19th century. Rural England was perhaps not the blissful idyll later portrayed by 19th century painters.


This exercise is to develop a series of maps and trails to plot the oaks at 150 years or more.

To begin - How to plot, how to present, how to interpret???

Well it all begins, and possibly ends, on the ground, and if nothing else there will be a series of interesting walks and measuring exercises.

Desk top research reveals little about Birmingham oaks - The Birmingham and Black Country Wildlife Trust website - "In Birmingham, there is even an area called Selly Oak, named, in part, after a prominent Oak tree that formerly stood at the crossroads of the Bristol Road and Oak Tree Lane/Harborne Lane."

The Birmingham and Black Country Biodiversity Action Plan (2010) mentions 'upland oak woodlands' at various locations none of which are in Birmingham; and further reports a study of ancient woodland in 2008 in which 89 sites, totalling 318 hectares were recorded.

So I'm beginning to think there is not a great deal of documentation related to significant individual trees.


So here goes - the first walk this year involved the 'Talking Walkers' at Kings Heath Park, energetic talkers, enthusiastic about talking; so on our August walk we focused on measuring oak trees- measuring 1metre above ground and discovering 7 trees in the park with a girth of 320 cm or above, giving an approximate age of 150 years.

Good start, but what do I do with the info to make it more interesting?  Well we had a good chat about a whole range of things, including the area, the big white house, knapper galls and fruit trees- NEXT BLOG