The Ravens of Moor Green 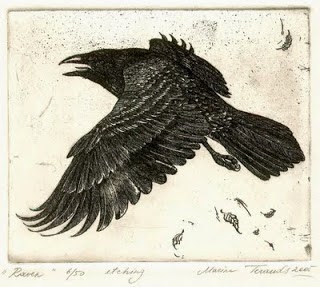 Many people talk of Ravens and other crows with a certain innate knowledge, often detailing things you wouldn't necessarily find in ornithological texts. Most texts will however relate to the 'folk lore' of crows and Ravens with depictions dating back a thousand years, providing evidence of long associations and affinities with Royalty and Peasantry alike.

The presence of Ravens above Centenary Wood and around Moor Green over the past few days is significant in terms of natural adaptation; my book, 'The Crows', from 1978, suggests that Ravens are "confined to - Scotland - the Shetlands, Orkneys and Scottish islands; the Lake District and part of the north Pennines, Wales, Devon and Cornwall with a few other scattered areas."

Way back in time, perhaps until the early 19th Century, Ravens were city dwelling scavengers along with Black Kites, both carrion eaters, so we must imagine the bountiful supply of dead rotting flesh to be found in the streets of Olde London Town, especially during the 15th and 16th centuries. They were eventually persecuted to the point of local extinction and only found now as captive birds at the Tower of London

Legend says that the kingdom and the Tower will fall if the six resident ravens ever leave the fortress.
It was Charles II, according to the stories, who first insisted that the ravens of the Tower should be
protected.
This was against the wishes of his astronomer, John Flamsteed, who complained that the ravens impeded the business of his observatory in the White Tower.
Despite their having one wing trimmed, some ravens do in fact go absent without leave and others have had to be sacked.
Raven George was dismissed for eating television aerials, and Raven Grog was last seen outside an East End pub.
- See more at: http://www.hrp.org.uk/TowerOfLondon/stories/theravens#sthash.jLdAmind.dpuf

Over the past few years Ravens have bred at nearby Lickey Hills with further reports at other 'edge of Birmingham' sites. So their presence at Moor Green along with Rooks, breeding at Highbury in 2012, is an exciting movement within our ever changing world.

Some people confuse Carrion Crow and Raven, but amongst other ID features the unmistakable 'CRONK' is the certain give away.