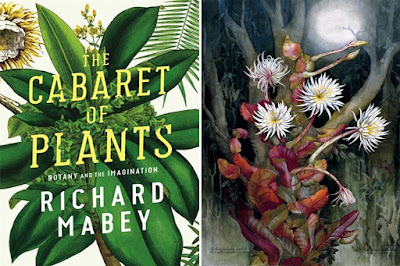 In the chapter 'The Cult Of Celebrity' Richard discusses the Yew in terms of its ancient sacredness and celebrity status amongst Tree lovers, Botanists, Druids and New Age devotees.

It seems to me that most of us with any interest in trees will have a particular story of the Yew. For my part, as a child, one of the trees at Oakley's Park, Colley Gate (Cradley) was known affectionately as 'the easy tree', and most suited to the initiates of tree climbing. Some progressed to the Eagle's Nest and the Owl's Nest in the grounds of The Grange, and here one could hide from the staff employed at, what became known as an 'illegal abortion clinic'. Today it is the respectable West Midlands Hospital.

The most experienced tree climbers would risk life and limb to traverse a line of 5 or 6 Sycamore trees above the spiked railings bordering the park; several spiking incidents occurred, causing serious injury. One had to be particularly adept and only a single person to my knowledge (Tinner) gained the title of 'the tree climber', and I believe he was spiked on at least one occasion.

The 'easy tree', the Yew on Colman Hill, nevertheless was a splendind climber, made accessible by the stubby limbs created in the course of maintenace pruning, one could reach the giddy heights of around 20-30 feet with no fear.

Yews of the Rea Valley
It seems that ancient Yews are difficult to age because of the unusual growth character, so we look for other clues to determine an approximate age, although Mabey does relate the formula - [dbh/2]² x π), and this he says seems to work well when tested against trees of known age (documented).

There are at least four roads in Birmingham entitled 'Yew Tree', (Postcode(s): B13 8QG, B36 0BN,
B15 2LX and B6 6RX together with a well known pub location at B25), providing some evidence therefore that Yews have a particular significance but probably no more here than any other City. Yew Tree Road in Moseley, B13, is near Highbury, and within the grounds of the old estate can be found a remnant quadrangle of yew trees, now somewhat dilapidated together with a nearby single Yew of significant age, possibly the oldest in the Rea Valley.

COFTON HACKETT St Michael and All Angels Diocese of Birmingham SP0118375352
The church is 14th century. The yew was first noted in 1946 when Rev. H.R.Chaffer gave information to Vaughan Cornish for his book The Yew Tree and Immortality. It was, he said, ‘reputed to be more than 800 years old’.
2002: The fallen male yew grows SW of the church. The size of its upright branches suggests it fell many decades ago. It would appear that the yew followed the normal developmental stages of cylindrical growth, hollowing and becoming horse shoe shaped. It was unable to remain upright and gradually leaned until its bole direction became parallel to the ground. In this new unorthodox position, just as with yews at Powick, Lee and Benington, it can continue to develop for many more centuries.
Ç Tim Hills 2015