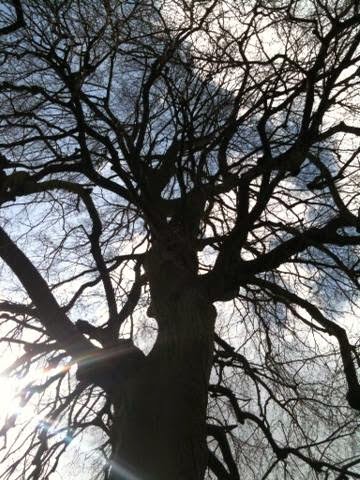 Where there's Ravens there's witches, and one Moor Green Witch informed me today that the Ravens had raided a Crow's nest and were seen murdering and carrying away the chicks, no doubt before devouring them.

One of the Crows, whom the Witch calls Dodger, was behaving with peculiarity today following his loss, but knowing something of Crow resilience, I tried to reassure her that the clever Crow is unlikely to fall victim to the Ravens a second time and will undoubtedly raise young before the season is out. This, she knew.

At least six Ravens have been seen above Centenary Woodland over the past few days and for sure the Crow wars will continue for some weeks ahead, for the Ravens are also clever and they've caused a stir.

This article from the internet sheds some light on a shadowy subject, and whilst there may be some sentimentalising, there is clearly an understanding of Raven behaviour based on observation, reading and learning.


Raven
The Raven is the most sacred bird of the British Isles. Raven is a bird of magic and mysticism, shapeshifting, creation, birth and death, healing, initiation, protection and prophecy. Raven is great at vocalizations and can even be taught to speak. She can use tools, is not intimidated by others, is fast and wary, and does not make easy prey for other animals.
In the Near East, Raven is considered unclean, due to the fact that she is a scavenger. In Norse tradition, Odin had 2 Ravens as messengers (Thought and Memory). Furthermore, Odin was known to shape-shift as a Raven. In the Pacific Northwest, Raven was the bringer of life and order. She was the bringer of sunlight. Even in British tradition, Raven is seen sometimes as a bird of morning, sunlight and joy. In the tale of Beowulf, Raven helps Beowulf to victory.
Bran the Blessed, whose name means Raven, was sometimes known as the Raven King. He was beheaded in battle, and his head was buried in White Mount, which later became the hill on which the Tower of London was built. His head was placed to face the enemies and protect England from invasion. In fact, both London and Lyons had Raven totems. Furthermore, both cities were dedicated to Lugh who was warned of the approach of the Formorians by Ravens. Another legend claims that King Arthur became a Raven upon his death.
Ravens are often associated with death and the Underworld. The cries of Ravens are heard before death in battle, and Ravens are often said to bring messages from the Underworld. For this reason, they are bird of prophecy and divination. The Raven has the ability to see the past and the future, while living in the present.
In this way, the Raven is a bringer of Initiation, both little “i” and big “I.” Initiation is, after all, a death of one thing and the birth of another.
Raven is strongly associated with Morrigan (and one of Her particular aspects, Badb). Morrigan appears on the battlefield as Raven (or Scald-Crow), bringing havoc and fear in the enemy. Linked to their presence at or proclamation of Death, they are associated with deep healing (the kind of healing that comes from radical confrontation with the hidden), the type of healing offered by the Morrigan.