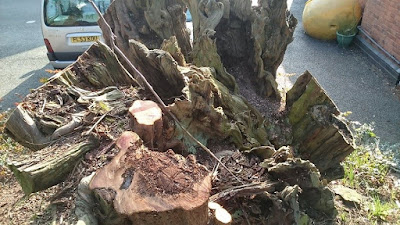 A 'several' hundred year old Yew tree cut to a stump and if that wasn't bad enough it was then treated with a chemical to prevent re-growth. 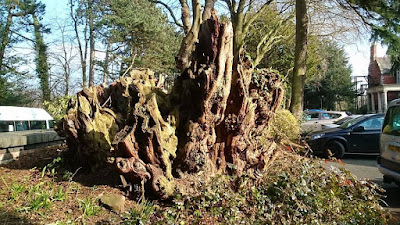 The tree is in the grounds of Uffculme, former home of Richard Cadbury, in Kings Heath, Birmingham. 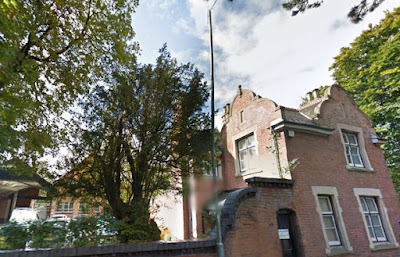 Here the tree in its former glory; the growth was not particularly obscuring ot threatening and from this angle posed no danger to the nearby road. 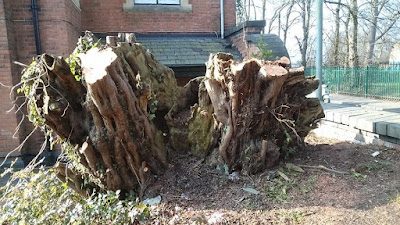 There is much decay at the base, which is 10 feet, my feet, diameter at ground level, there was also much vigorous growth. 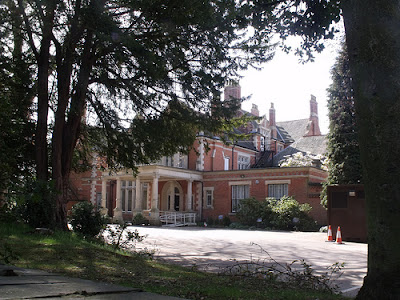 Another former view of the tree, the crown growth perhaps belies its age.


The Birmingham Mail reported the following on March 24th 2016 -
"Outrage as 500-year-old Birmingham tree chopped down by health bosses.Park ranger demands answers after ancient Yew in Kings Heath is axed by Mental Health Trust. The park ranger has demanded a root and branch investigation into why one of Birmingham’s oldest tree has been hacked down. The ancient yew – reckoned to be some 500 years old – may first have been planted around the time Leonardo da Vinci painted the Mona Lisa. If it proves to be as old as locals believe, it would also have been in Birmingham when Drake defeated the Spanish Armada.The tree has been reduced to a tangled stump in the grounds of Uffculme House in Kings Heath after health bosses feared it posed a safety hazard. A survey revealed it was suffering “significant decay” so Birmingham and Solihull Mental Health Trust ordered that it be axed. Residents living close to the Queensbridge Road site say they are horrified that the tree has been removed. Alf Dimmock, a senior Park Ranger with Birmingham City Council, said he had been approached by angry members of the public.“It is possibly the worst case of treeicide I have witnessed,” he said. “From a personal point of view I find it very sad. The tree was very much part of the city’s heritage and is a terrible loss to the people of Birmingham.” He said on social media that the tree could be at least 500 years old and he has been in touch with experts at the Ancient Yew Group. The Uffclume building was the former family home of Richard Cadbury, who built it in 1891 and gifted it to the city of Birmingham in 1916 to help further psychiatric health services. Mr Dimmock added: “Richard Cadbury had spoken about a yew tree that had been in the grounds for centuries when the building was built in 1891. “I think the real concern from local people is that there was no consultation about the plans to remove it. Somebody I was speaking to compared the situation to someone going to a doctor with a sore finger and having an arm chopped off. There are alternatives such as lopping and pruning.” A spokeswoman for the trust said no preservation order had been attached to the tree nor any others inside the Uffculme House estate. She added that a survey had judged the tree “over mature” and said it had needed to be removed to ensure the safety of staff and visitors."