From plantation to woodland 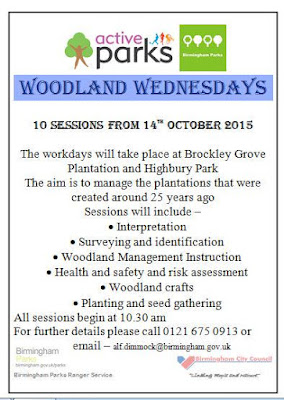 When does a plantation become a woodland? It's not an overnight occurrence but a gradual process and mostly overlooked.

Brockley Grove Plantation at Moor Green, like many other plantations created in the 1980's and 90's, is showing signs of woodland; beyond the presence of trees are subtle hidden changes, taking place year on year as decay and decomposition set in, aided by dead wood, fungi, invertebrates and other micro organisms, vital elements for the increasing biodiversity.

The accelerated process begins with the planting of trees, but in a natural state pioneer species would colonise with the aid of seeds dispersed from local specimens - Windblown Birch and Ash, bird dropped seeds from Hawthorn, Jay planted acorns from Oak and fallen nuts from Hazel.

This week we witnessed the presence of an Orange Ladybird,

the Uk Ladybird survey informs us -

Other notes: Considered an indicator of ancient woodland until 1987. Has become widespread since it became common on sycamore trees. Recently has also moved onto ash trees and appears to be increasing in abundance. It is attracted to light and is often found in moth-traps. Rarely breeds before mid-June.

Mature Sycamore is indeed present at Brockley Plantation but casts a heavy shade over the coppiced  Hazel stools, so a decision may be required if one species seems to be dominating, for now it's an awareness and monitoring exercise and we'll check on the regrowth of the Hazel stools next Autumn.

Thanks to Terry Quinn for photos