All the cutting for the season is now complete in the RSPB woodland and further work between now and the end of March will involve path access work over the muddy patches.

Cockshutt hill School are currently constructing a small section of Hazel corded pathway near the coppice 2011-12 area and this will continue on the 5th March.

Following this we will monitor and record the re-growth in the coppice area and hopefully witness an increase in the number of invertebrate food plants, it will be interesting to see what appears.

FURTHER PLANS FOR CHP WILDSIDE DURING 2012-2013
Following the CHP Friends meeting on 4th March, the Rangers and Friends will be recording the flowering species in the wildflower meadow and collecting seeds locally to enhance the meadow throughout the year.

Although not a brilliant profusion of colour last year, the meadow is nevertheless valuable for providing nectar food plants for bees and butterflies. I'll be asking local naturalists and wildlife recorders to keep an eye on the meadow and to report on plant and animal species.

Progress at the Plantation
Following two further productive days at the plantation with Bournville College and a public work day, the cutting for this year is near completion.

Most of the understory has now been cleared, just a cover of dogwood and blackthorn to go and then a few selected trees to open the canopy and allow for crown development of the remaining standard trees; this to increase longevity of the standards, mainly oak and alder, and also to maximise light levels for ground flora. 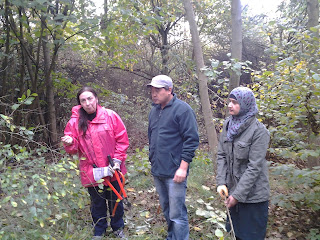 Karen, Pasang and Naima taking a well earned rest and, of course, a pose for camera. "watch the birdie". Now where did that saying come from? 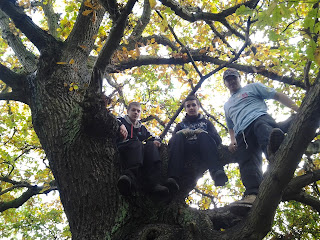 No birds up that tree boys