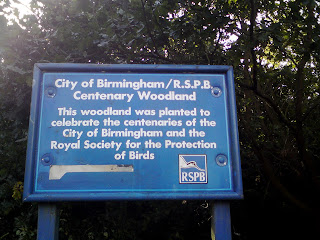 Two trees within the woodland plantation predate the 1989 plantings, these being a 150+
year Oak and a 100 year old Sycamore, other than these all trees were either planted in
1989 or have developed from self sets since that date.

According to a report from 2008 the area is said to be approximately 5 acres.

Understory species, woodland structure and accessibility -
The understory is sparse over much of the site creating open woodland with a couple of
dense bramble thickets in the centre and around the perimeter.
Previously coppiced Hazel stools provide some shrub layer but these are few and far
between.
There is some oak succession in the Birch area in the north-east corner but nothing older
than three of fours years.
Ash regeneration is prolific on the northern side but again nothing more than about three
to four years growth.
Nettles are found to the north and grasses are found in some areas depending on canopy
type, grasses grow well in the Birch stand in the northeast corner and to some extent in
the ash plantation in the north.
A network of paths compartmentalise the site and seem to follow the boundaries of the
original planting stands with certain species dominating particular compartments.
Some paths are unused and overgrown due to wet conditions.
A dead hedge was created in memory of Spencer Reid, a Park Warden who died in 2008.
The hedge provides a valuable dead wood habitat and a number of frogs were found on a
Family Learning Day in august 2011.

Evaluation of diversity and species
Because of the network of pathways and lack of structured management to date the area
is of limited value to nesting woodland birds.
On previous visits during July and August flocks of mixed tits were seen in the canopy.
RSPB Woodland Plantation Management proposals for 2011-2012
Phase 1 Survey, 13th September 2011
Sunny glades and woodland edge to the east allow for grasses and flowers to flourish as
well as bramble and Speckled Wood butterflies were witnessed at the time of survey.
A flock of about six Jays were seen cavorting through the Ash canopy at the northern
edge.
A Green woodpecker was seen between woodland and allotments to the south
Two Spot Ladybird and Shield Bug spp seen on a Hornbeam.
Badger and Muntjac Deer are evident in the surrounding park and woodland
Grey squirrel was seen on the ground near the large Oak
The large Oak, south west of the woodland centre is the most significant tree and is
probably a remnant from a late 18th or early 19th century hedgerow.
A flowering plant, possibly Soapwort and probably a garden escape or introduction is
growing amongst the Birches in the south east corner.
Around a dozen Spindle trees, found along the pathway near Spencerʼs hedge, were in
flower and provide a valuable contribution to the woodland diversity.
Poor ground cover over much of the site is a result of closed canopy and shading.
There is plenty of character to the woodland as a whole with the species stands adding to
the diversity and creating a particular and varied atmosphere throughout. On the day of
the survey, for example, the Rangers were impressed by a green hue as the sun shone
through the Ash canopy in the north of the site.
The northern section is largely undisturbed in recent years because of the wet conditions
and this provides something of a sanctuary for fauna preferring little or no disturbance.
Much of the Hazel is overdue for cutting and therefore of limited value for products.
However a certain amount of Hazel has been identified for use as hedging stakes, hedging
binders and for wattled hurdles, and at the recent Cannon Hill Park heritage event
enquiries were made for a supply of Hazel rods for gardening purposes.
Further, enquiries are to be made with the adjacent allotment holders to see if any of the
materials could be of use to them.

Plan
The proposal for autumn/winter management 2011-2012 is to coppice a quarter acre hazel
stand near the southern edge of the site consisting of around 10-15 stools.
The cut materials will be used for the following -
• Hedging Stakes
RSPB Woodland Plantation Management proposals for 2011-2012
Phase 1 Survey, 13th September 2011
• Hedging Binders
• Wattling Rods
• Weaving Rods
• Dead hedging habitat
• Other
Survey carried out by Alf Dimmock and Allan Watkins (Birmingham Ranger Service)
Report made by Alf Dimmock; 13th September 2011